Posted by J.R. Villada on October 9, 2015 in Blog | Comments Off on METALLIC PARTICLES AFTER PHACOMULSIFICATION 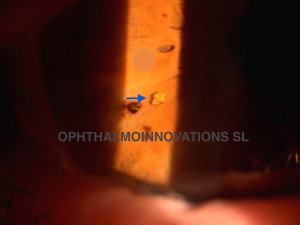 This picture was taken by Julian Tendero, Optometrist from Baviera Clinica in Albacete (Spain). It shows a metallic? foreign body after phacoemulsification. We have reviewed the subject and we here show a resume.

Metallic pieces in the anterior chamber, usually attached to the iris, after phacoemulsification, are very common. The first publication I could find about it comes from Dunbar et al. in 1995 (Dunbar CM, Goble RR, Gregory DW, Church WC. Intraocular deposition of metallic fragments during phacoemulsification: possible causes and effects. Eye (1995) 9:434-436). They studied in the slit-lamp 56 eyes which had undergone routine phacoemulsification and found metallic particles in 86% of the eyes. They studied and photographed twelve phacoemulsification needles and concluded that the cause of the FBs is not the touching of metallic instruments with the vibrating phaco tip, but the wear of the middle part of the needle. They also showed their concern because these particles are not inert and they could attract macrophages that release lysosomal enzymes, collagenase, interleukines and prostaglandines. Does it sound like potential TASS?.

So, what do you think?, where are this particles coming from?, are they dangerous?, capable to produce TASS?, a legal problem?.