WHAT HAPPENED WITH THIS PATIENT?/QUE PASÓ CON ESTE PACIENTE?

Posted by J.R. Villada on October 4, 2015 in Blog | Comments Off on WHAT HAPPENED WITH THIS PATIENT?/QUE PASÓ CON ESTE PACIENTE? 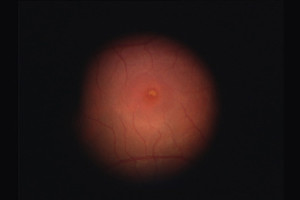 The patient recovered completely in 4 months, treated only with topical steroids and mydriatics.

They studied 15 patients who suffered solar retinopathy as a result of viewing the subtotal (98%) solar eclipse in East Sussex on 11th August 1999.

Eclipse retinopathy is the commonest cause of solar retinopathy. Victims of solar retinopathy may complain of blurred vision, a central black spot and metamorphopsia. After 6 months the visual acuity is usually in the range of 6/5 to 6/12 but frequently with a small central subjective scotoma. Visual acuity does not always recover and has reportedly remained as low as 3/60 with permanent retinal damage in the form of retinal holes and pseudoholes.

After a week the initial deep yellow exudate shrinks and may be surrounded by a red halo followed by retinal pigment epithelium hypopigmentation with surrounding pigment clumping at 6 weeks. The appearance of a lamellar macular hole at or adjacent to the foveal reflex may develop.

Ultrastructurally, photoreceptors suffer fragmentation and vesiculation of the rod and cone outer segment lamellae as well as pyknosis of nuclei especially of parafoveal rods. Relative survival of foveal cones may account for the good prognosis for visual acuity.

Two large studies of solar retinopathy were found. Rai et al describe 3-year follow-up of 319 solar retinopathy patients, 126 of whom had observed a solar eclipse. They found a similar good prognosis for visual acuity and only a small proportion with longstanding metamorphopsia (11 eyes of 319 patients). Abnormal tritan colour contrast sensitivity was found in five patients investigated.

Another study was of 58 solar eclipse-related solar retinopathy patients with a mean of 4.2 years follow-up. This found a rapid initial improvement in visual acuity over the first month with no further improvement after 18 months.

Our study concurs that patients can make an excellent recovery in the first 3 months following a solar retinal injury. 6/6 visual acuity was attained in cases 4, 14 and 15 despite initial visual acuities of 6/36, 6/24 and 6/18 respectively. Persistence of foveal hypopigmentation at 3 months in cases 5 and 14 may have been predictive of worse long-term visual acuity as may have been significantly abnormal achromatic contrast sensitivity (ACS) and chromatic contrast thresholds (CCT).

Visual acuity can improve considerably in the majority of eclipse-related solar burns. However, the persistence of visual symptoms in those with mild burns would suggest that even brief glimpses of a solar eclipse should be avoided.